Poultry keeping has gone hand-in-hand with agriculture for thousands of years.  With the advent of commercial agriculture (now called ‘conventional agriculture’) poultry breeds, along with produce varietals, have begun to disappear from our farmsteads and our plates as the focus has turned towards producing food quickly and in high quantity.  This has fostered and encouraged industrial livestock creation.  Most poultry produced for food consumption in this country live tiny, cramped lives and are unable to even reproduce naturally.  As the Livestock Conservancy so eloquently puts it, “Heritage breeds store a wealth of genetic resources that are important for our future and the future of our agricultural food system.”

Growanstede Smallhold seeks to nurture the natural lives of our poultry, allowing them to live long, vigorous lives that promote their own self-sufficiency.  We have chosen several threatened breeds to help perpetuate based on the climate we reside in, the production levels that are compatible with our small acreage, and personal preference.  Each of the breeds present on this farm are bred with care, raised organically with fresh air and pasture, and have only their ‘one bad day’ when it comes time to place them on our or a customer’s table.

Icelandics, or Íslenka landnámshænan—are a rare heritage landrace chicken breed that has a unique, compelling history. They were brought to Iceland by Norse settlers (yep—Vikings!) somewhere between 800 and 900AD and had no outside genetic influence for thousands of years. There is no standard for this breed. They were able to evolve at their own pace on their island home and have nearly 80% unique DNA as compared to other chickens. If you ever come to visit Growanstede, you would be able to tell subtle differences between this crew and our other birds. Even the rooster crows sound noticeably different! These are a social, active special breed that require very careful handling so their special traits and genetics never mix with other chickens. Often referred to as ‘pile chickens’ (for their enthusiasm for dismantling compost piles) they’re very industrious foragers, making their way further afield than our other breeds. We’re fortunate to be able to be set up for such a situation and we can’t tell you how happy we are to be stewarding such an amazing landrace.

Icelandics were imported to the United States in the 1970’s.  There are only four genetic lines being maintained here.  The Growanstede Icelandic flock is a mix of all four. 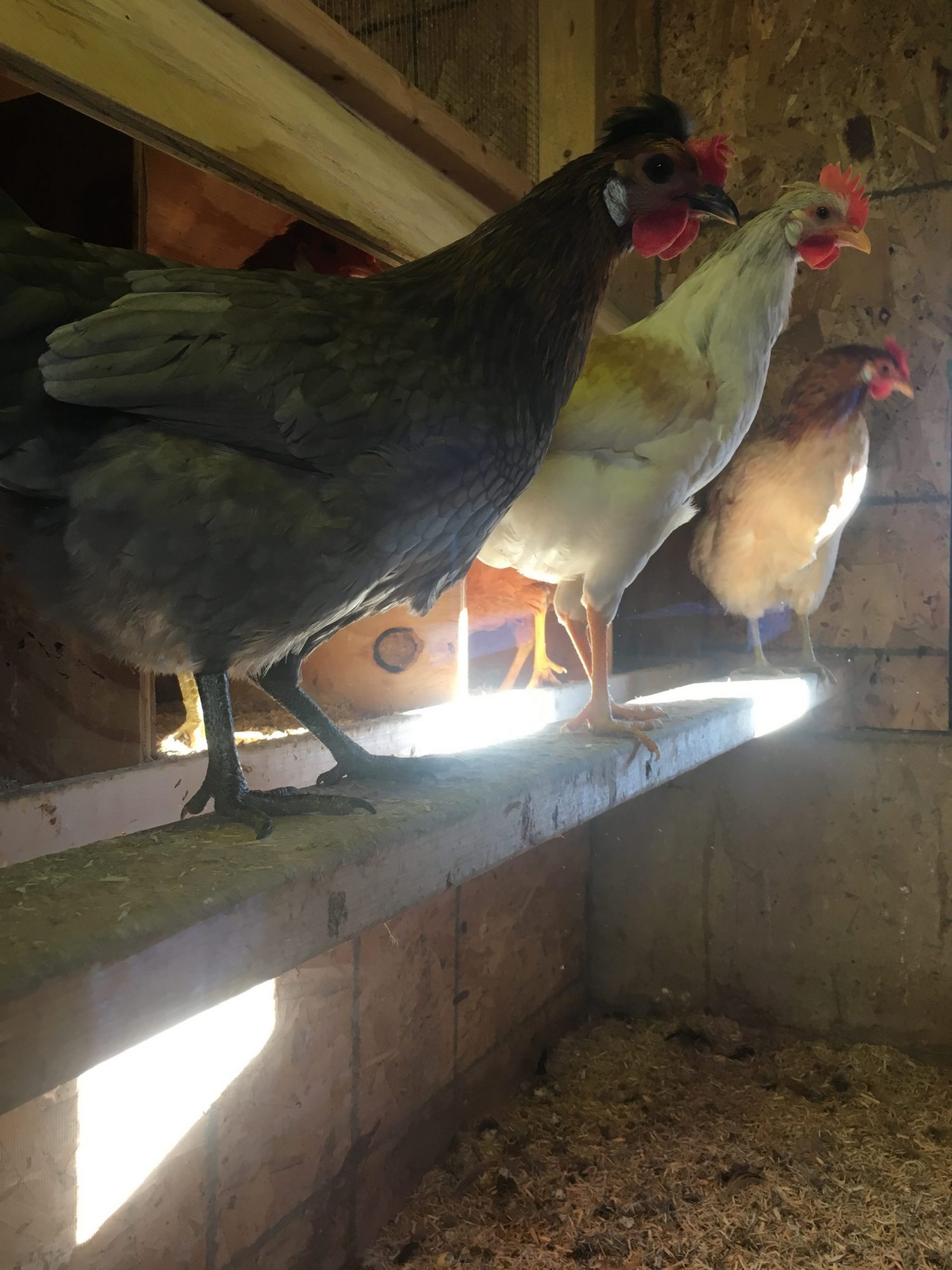 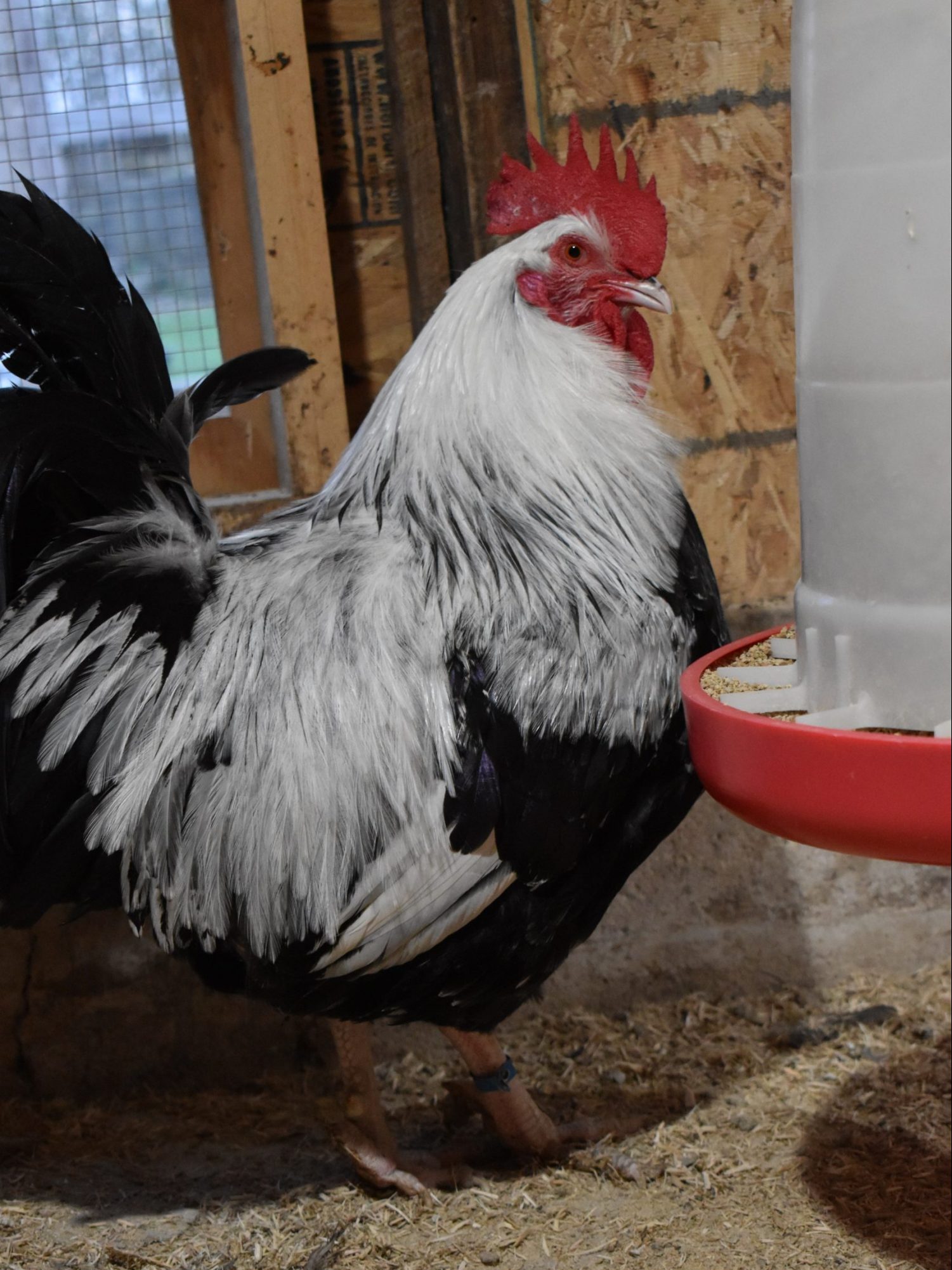 Our Dorkings are one of the most beloved birds on the farm.  They have the unique trait of having five toes on each foot instead of the usual four and are a cheerful lot puttering around the yard.  Though we raise only the Silver Grey (or Silver Gray) variety, Dorkings can come in White, Coloured, Cuckoo, Black, Red, and Speckled.  The origins of the Dorking is uncertain, but as far back as the Roman empire a 12-volume treatise on Roman Agriculture written by soldier-cum-author Columella mentioned “five-toed fowls”, leading many to deduce that the Roman Legions may have brought these birds with them when they occupied Britain (there’s a reason our rooster is named Artorius

).  We can certainly see why campaigning soldiers would want these guys along–they’re huge, tasty, and lay eggs quite well, making them the perfect embodiment of a dual-purpose breed–a standard that is common of heritage breed livestock.  Named after the town of Dorking in England, the breed slowly evolved through the centuries into the birds we love today.

Dorkings were imported to the United States well before 1840.
They were well established here by that point.

Sussex are another proud British table bird.  Though younger than the Dorking as a breed, a Sussex chicken was one of the first birds shown at the first ever Poultry show held in London in 1845 being then called a “Surrey Fowl” and “Old Sussex and Kent Fowl”.  Having a long-standing reputation for being one of the more famous of British breeds producing fine meat for the table, Sussex became our heritage breed of choice for our meat production during our second season on the farm.  Exhibition and breed-standard birds are very hard to find, and we have had to start from “scratch” as it were, from hatchery stock, beginning to build a breed we are proud of with the help of our meat customers.  The more birds we produce, the more we can move toward the tastiest table bird in the land.  The breed has branched out a lot since the early 1900’s and come in a plethora of colors, though the original birds were likely speckled, red or brown.

Sussex were imported to the United States around 1912, only 10 years after they were saved from severe decline and a breed club was formed in the UK. 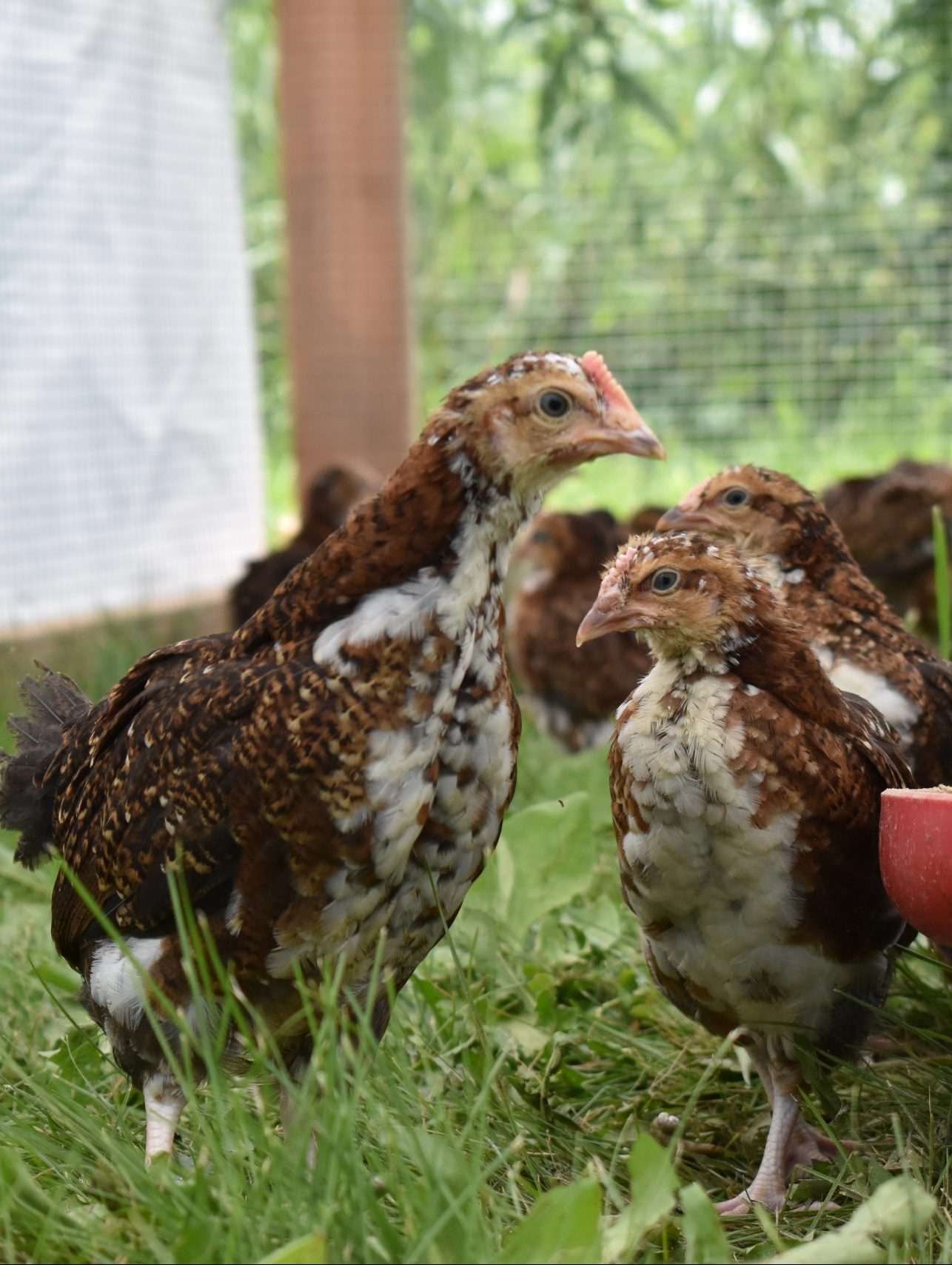 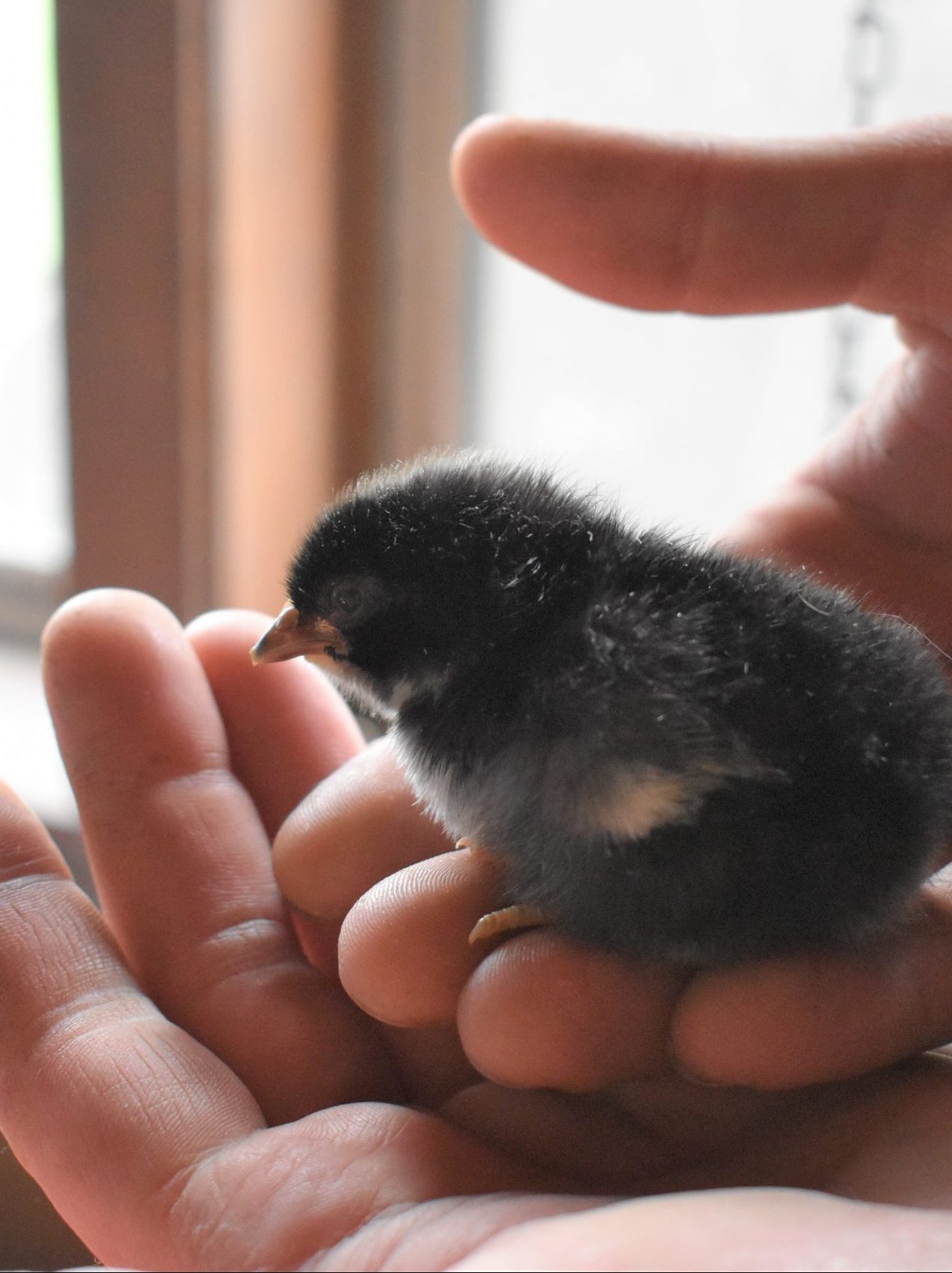 Scots Dumpies (also known as Creepies, Crawlers, Bakies, Dadlie, Hoodie, GaeLaigs, and Laighies) are referred to as Scotland’s “original gang-aboot hen”. One of only two purely Scottish chicken breeds left today, Dumpies have been present for hundreds-if not thousands-of years.  A leg bone of a Dumpy or it’s predecessor was unearthed at an Iron Age site in Austria in 2012.  Dumpies are a short-legged chicken.  They have a form of dwarfism similar to that of the Dexter cattle and a standard Dumpy has legs only 1-1.5 inches (2.5-3.8cm) long, causing them to waddle when they walk.  The breed was in severe decline by the latter half of the 20th century, and was saved only because a British emigrant to Africa had maintained her flock, allowing them to be re-imported in the 1970’s.  We were so excited to be able to find and order hatching eggs in spring of 2021.  Out of the 25 eggs we received, we hatched 15.  We’re looking forward to establishing a secure flock here!

CONSERVATION STATUS : CRITICAL as per the Rare Breeds Survival Trust
in the UK.  These birds are almost nonexistent in the United States,
and I am unsure when they were imported.

Not all of the chickens here at Growanstede Smallhold are part of a dedicated conservation breeding flock.  We do maintain several Ameraucana chickens and Cuckoo Marans chickens to keep the contents of the egg-basket more diverse, and we also have several holdovers from when we first moved here.  About 80 birds were already in residence when we moved in (including some of our prized Dorkings!) and as the years have passed those numbers have declined but not yet disappeared.  All of our birds are well loved, no matter their origins! 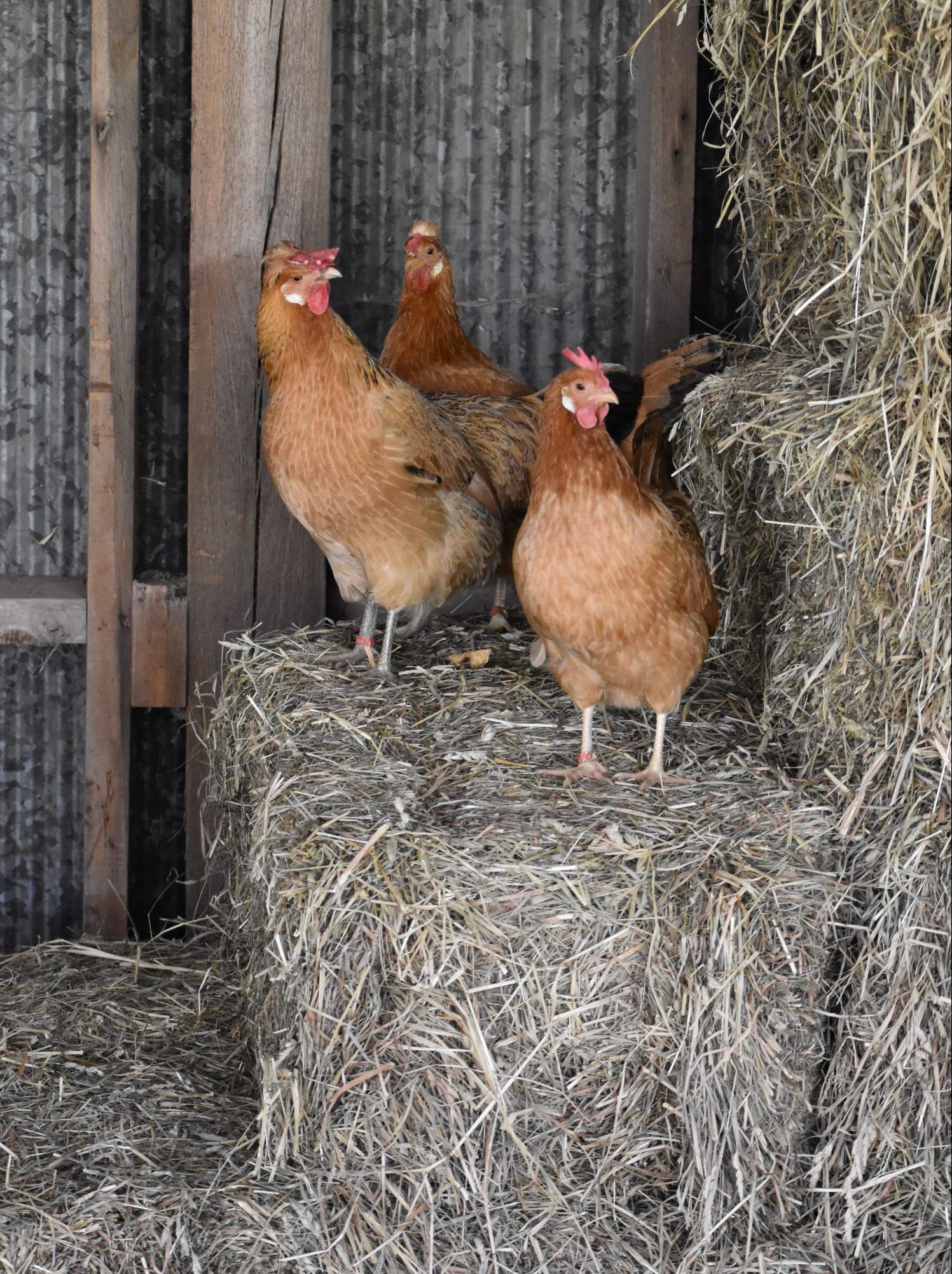 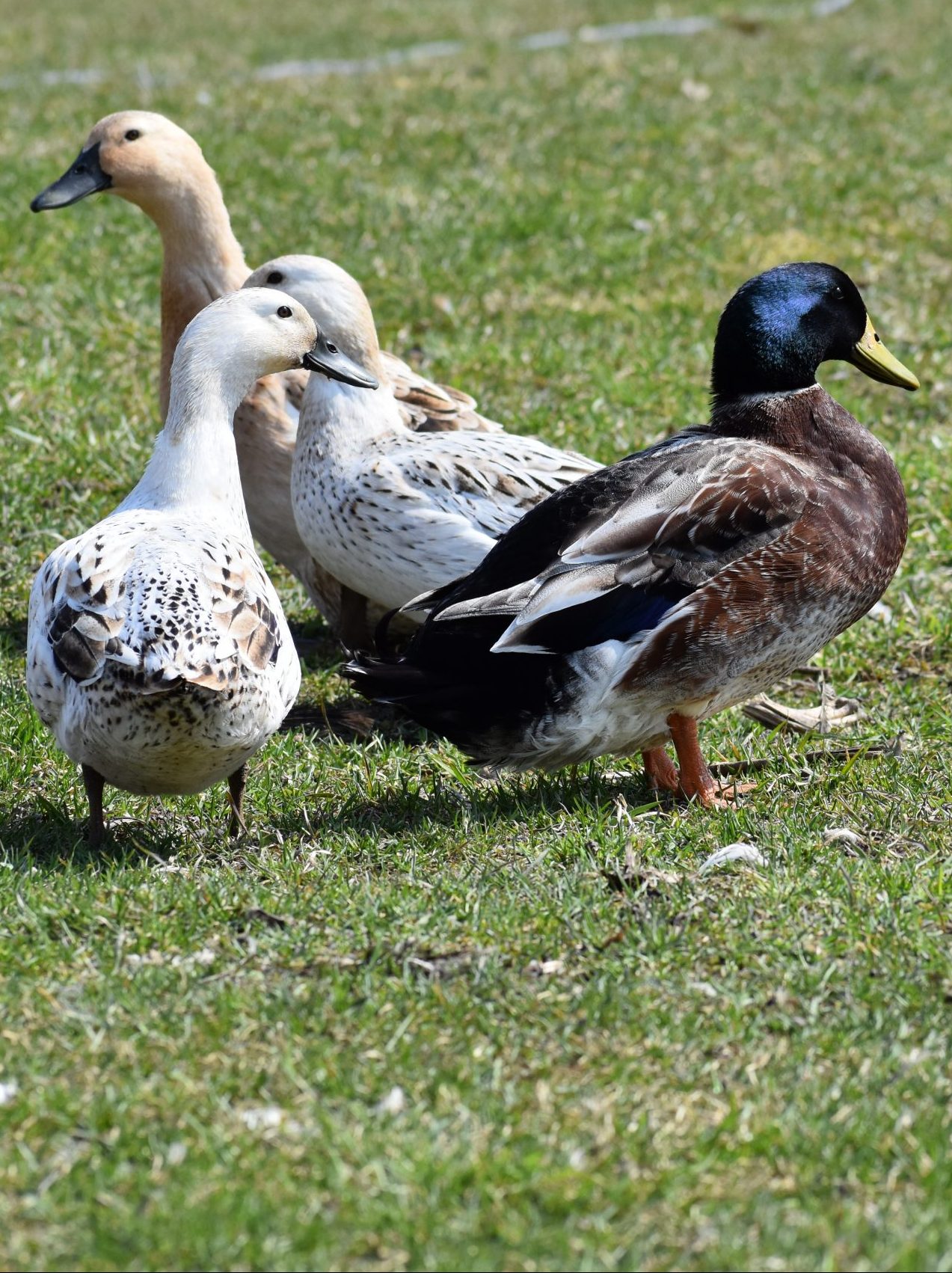 Welsh Harlequin ducks are small-bodied birds that lay extremely prolifically.  The original breed developed out of a mutation of a flock of Khaki Campbell Ducks in Criccieth, Wales in the 1940’s.  Harlequins present in two colors, gold and silver, and Growanstede’s small flock possesses both.  Our Harlequins are foraging masters, and are seemingly impervious to any weather.  It’s such a treat to watch them use their webbed feet in the winter to seemingly float on the top of the snowbanks (while their chicken neighbors are only too happy to stay indoors), and it’s a scavenger hunt to see where on the farm they’ve decided to take their daily nap.  They’re cheerful and chatty, and I love when they visit outside my office window.

Welsh Harlequin Ducks were imported to the United States first in 1968 and again in 1982.

Black Turkeys, also known as Spanish Black or Norfolk Black Turkeys were originally brought to Europe by Spanish explorers plundering the Aztec nation in the 1500’s.  They are now considered the oldest turkey breed in Europe.  They were re-imported to the America’s during British colonization in the 1600’s.  It is believed that black turkeys are the foundation bird of many of the heritage breed turkeys raised today.  Ours are chattery and docile, always wanting to be in on the action.  If you call ‘TurkeyTurkeyTurkey’ loudly across the yard you will usually get a gobbly answer, and calling them in at night is a delicate balance–too early and they’re not ready to come in, and too late and they’re roosting on top of the barn!  Griselda is our flock matriarch, and her offspring happily forage around the yard. 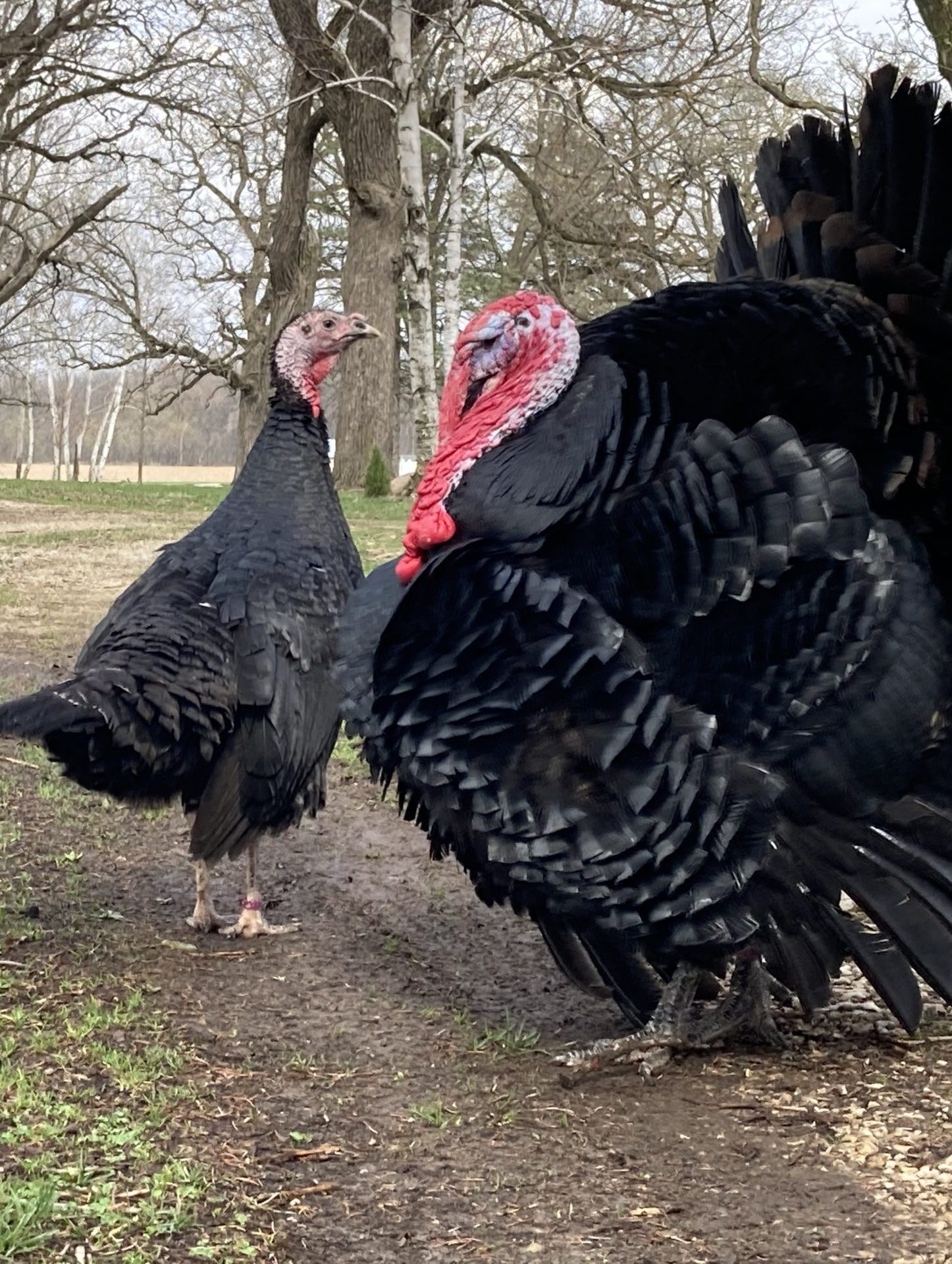 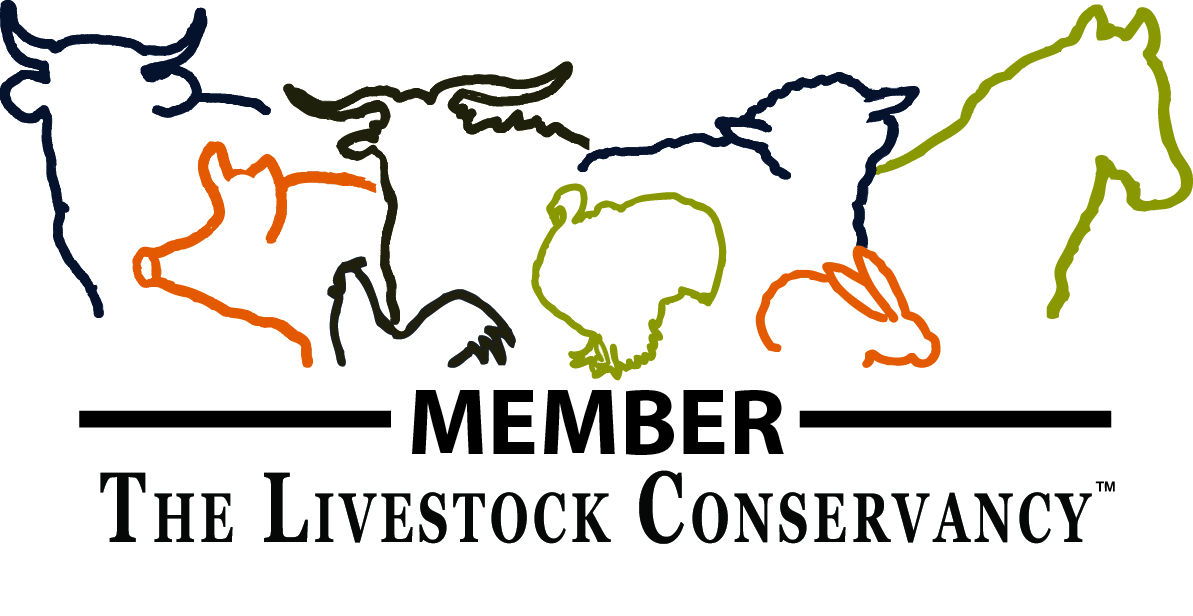 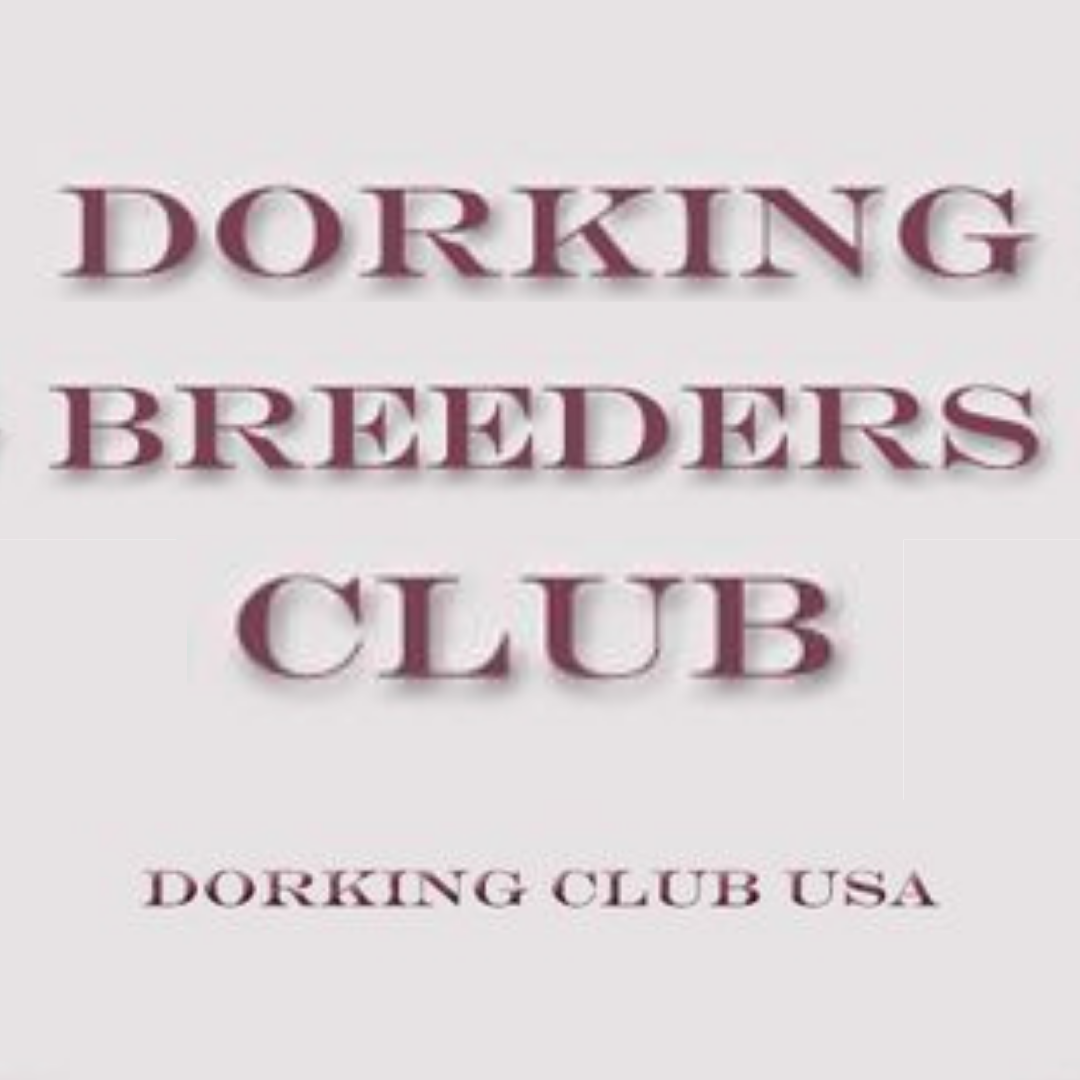